Captain Steven Mullaney is satisfied with Nottinghamshire’s start to the 2018 season in Specsavers County Championship Division One – even though he knows there is still room for improvement.

The Green and Golds have won three and lost two of their first three matches, collecting 70 points to sit top of the table, nine points head of second-placed Surrey but having played a game more.

An opening win at Lancashire was followed by defeat across the Pennines at Yorkshire before Worcestershire were beaten away and Hampshire at home.

However, they were brought back down to earth with a bump over this last weekend in losing at home by an innings in the return fixture with Lancashire.

“It was quite raw and disappointing after the defeat to Lancashire,” said Mullaney. “It was most disappointing that we didn’t do ourselves justice and play anywhere near as well as we can or have in the previous four games.

“If someone had offered us 70 points before the start of the season from the first five games, winning three of them, I think we’d have taken it.”

“But if someone had offered us 70 points before the start of the season from the first five games, winning three of them, I think we’d have taken it.

“We’re still well placed after this run of games and overall we have to be pleased because we are in an excellent position.

“I think I said in pre-season that after these first five games teams would be looking either up the league or down the league and I think we are definitely looking up the league at the minute.

“When we come back to this format in a few weeks and we go down to Somerset we will be focused on it once more, but for now we are excited in that we have a trophy to go and defend in the shape of the Royal London One-Day Cup.”

Mullaney was quick to pay tribute to the excellence of his seam bowling attack that has helped Notts’ encouraging start. 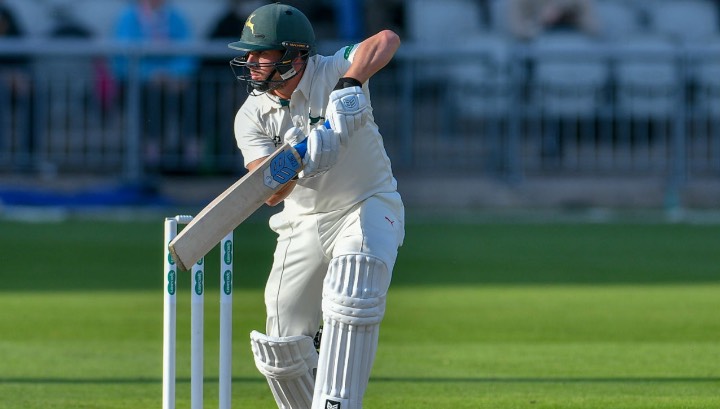 He said: “The bowlers have put in a great shift with five back-to-back games – Harry, Fletch and Jake and Stuart coming in and showing his class.

“It’s been tough on them, but it’s supposed to be tough in professional sport. No-one hands you wins or trophies and you have to work hard at it.

“It’s going to get even tougher at some points of our season, so we have to dust ourselves down and be ready for that.”

Notts’ batting has been up and down, with Mullaney leading the way with a solitary century and Ross Taylor making a promising start with three half-centuries.

The skipper is keen to see the top order put a greater value on their wickets once four-day cricket resumes.

“It is early-season for batting, but sometimes, particularly in the Lancashire game, we have handed teams wickets at times.”

“It is early-season for batting, but sometimes, particularly in the Lancashire game, we have handed teams wickets at times,” he said.

“If one of your opening batters can stay in for more than 100 balls in both innings then it’s not impossible to bat.”

Specsavers County Championship wins can often be hard to come by in the top flight, meaning Mullaney is pleased to have three in his belt already as captain.

He said: “They were three very different wins. The Lancashire game we were lucky in that we didn’t have the toss so we could bowl first in bowler-friendly conditions and managed to get a lead to put Lancashire under pressure and bowl them out for 70-odd second time around.

“The win against Worcestershire was in two days and it was a magnificent effort from the lads to get that within that time.

“Last week was more traditional when we had to stick in until the last day and play really hard cricket. For me they were all very satisfied in different ways.”