SUBLIME HALES STEALS SHOW AS OUTLAWS WIN ON THE ROAD

Alex Hales’ 96 from 54 balls helped Notts to their second away win in three days as their Vitality Blast defence continued to gather momentum.

The right-hander’s innings recalled some of his finest moments in Nottinghamshire colours, mixing brutality with timeless strokemaking as to carry the Outlaws to 195/5 from their 20 overs.

Durham’s barnstorming start to their reply was checked in the middle overs as Notts suffocated their opponents, the flow of boundaries running dry as the chase eventually became unassailable.

Earlier, the clock struck 6.30 as the ball struck the fence, Notts beginning their innings with a boundary. Joe Clarke, a centurion last time out in Northampton and last year in Chester-le-Street, was not in the mood to prevaricate.

Peter Trego came and went, bringing a bustling Ben Duckett to the crease, as Hales slipped through the gears.

An inside-out four through cover was executed with aplomb; a waist-high pull over the ropes at deep square leg was judged impeccably. 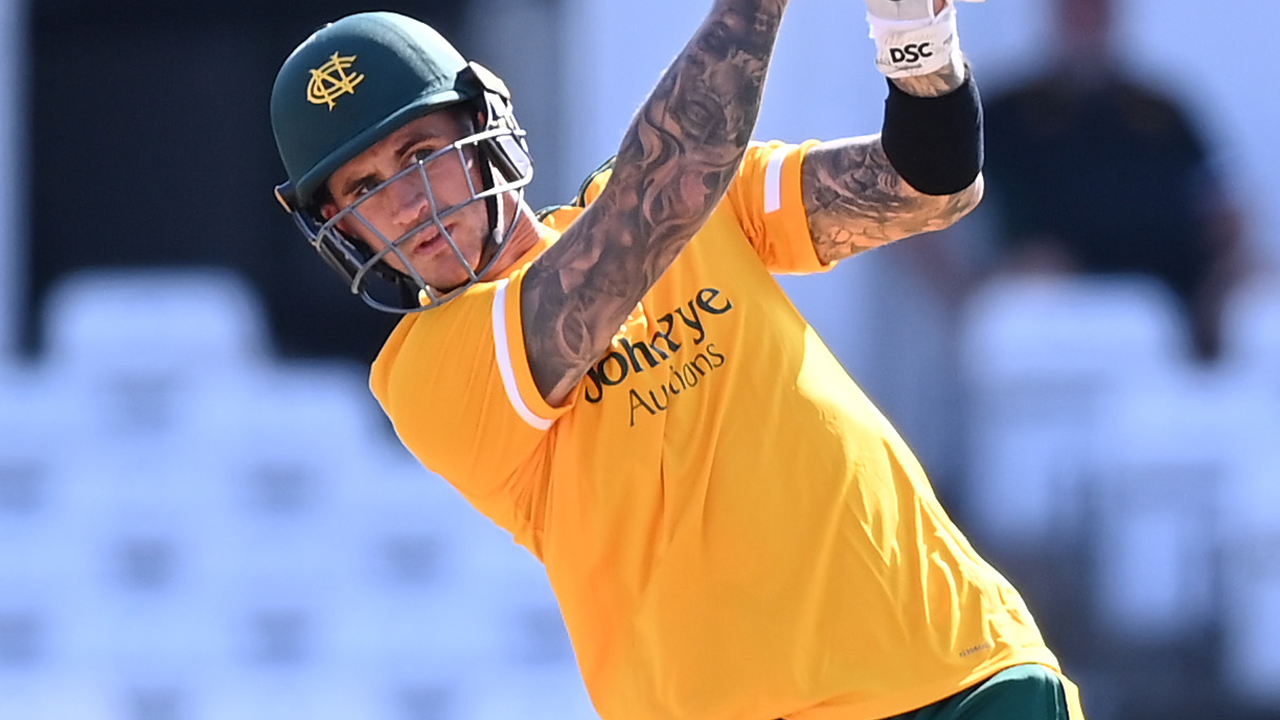 With Duckett offering up his usual smorgasbord of sweeps, and Hales’ cuts and drives piercing more traditional scoring areas, the Outlaws were producing a multi-spoked wagon wheel as they reached 62/2 from the Powerplay.

It was the week in which English cricket’s domestic T20 competition turned 18, and the destructive hitting on show from Messrs Hales and Duckett would have been inconceivable in the summer of 2003.

But this was not brutality for the sake of it, as an exquisite late cut and a brace of clips off the pads from Hales attested to.

Duckett and Hales reached their half-centuries from successive balls, before the long-limbed opener showed clear intent in dispatching Trevaskis for a four and two sixes in the 15th over.

Ben Raine checked the Green and Golds’ momentum in the 16th, removing both Duckett and his replacement Tom Moores, but captain Steven Mullaney accumulated breezily prior to falling victim to boundary-edge brilliance from Potts and Scott Borthwick.

The Durham pair were powerless, however, to prevent Hales from careering through the 80s courtesy of a perfectly-weighted lofted drive.

He arrived at the final ball on 96. That a break in play was required for a replacement bat – non-striker Samit Patel’s was proffered, then discarded – only served to heighten the sense of theatre.

A dot ball, eventually, ensued, leaving Notts a whisker away from chalking up 200 for the third successive game.

If Chester the Durham mascot was wearing a hangdog expression as he reluctantly participated in the pre-game dance-off, heaven knows he was miserable now.

But his spirits would have been cheered by David Bedingham and Graham Clark’s blistering start.

The fifty was up inside four overs, the Powerplay cost 74 – but Durham’s momentum was stalled as Peter Trego slid on his sleeve tattoo to catch Clark off Ball, the latter recording his 100th T20 wicket. 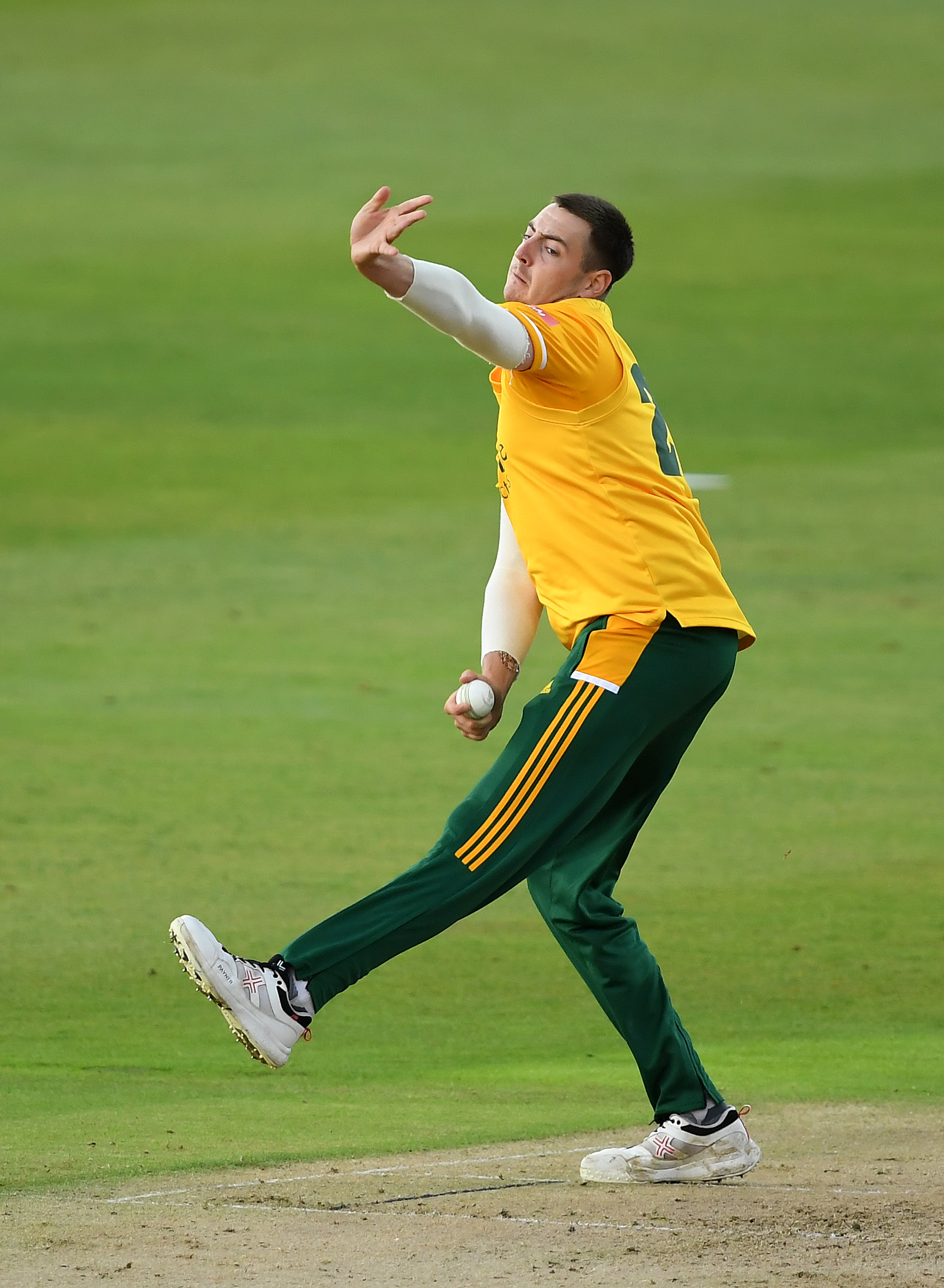 Then came a fine, stooping return catch from Carter to see off Cameron Bancroft for 1.

Durham’s chase was punctured, and the air seemed to seep from the home crowd as the seventh, eighth and ninth overs went for three, six and six runs respectively.

The tenth and eleventh brought more Outlaws success, Duckett pouching Ned Eckersley (5) off Patel and Jack Burnham (3) off Mullaney as he prowled the ropes with aplomb.

In the space of 39 balls, Durham had lost five wickets without once troubling the boundary.

Then, after a brief rally, came the sucker punch. Bedingham bowled, comprehensively undone by Patel having made an accomplished 64.

Durham were running out of time, and running out of men, Luke Fletcher stopping a dangerous-looking Paul Coughlin in his tracks for 20 when he holed out to Mullaney at long-on.

And while Trevaskis sent Notts nerves a-twitching with two fours and a six from three deliveries, the left-hander tried one big hit too many and could only find the hands of the Outlaws captain.

A masterful penultimate over from Fletcher came at the mere cost of four runs, before Jake Ball finished the job to secure two points on the road once more.