Trent BridgeMENU
T20 CRICKET AT 20: A TALE OF TWO TROPHIES
INTERNATIONAL CRICKET
IN 2022

Our four-part history of T20 cricket in its twentieth season concludes with a glorious period in Outlaws history.

The Green and Golds have qualified out of the North Group on every one of their last five attempts, a record unmatched by their T20 rivals.

Their yearly dates with destiny have seen no shortage of drama, either.

Sandwiched between their ultimate successes in 2020 and 2017 was that infamous near miss of 2019, while 2021 could have seen Notts heading to Edgbaston once again but for a remarkable fightback from Hampshire Hawks in a year which, miraculously, included three tied games.

And while England had kickstarted their white-ball reset under the captaincy of Eoin Morgan, it was an Australian who found success leading Nottinghamshire.

Dan Christian appeared in West Bridgford in 2015, but took the captaincy mantle a year later. A consummate professional and a fierce competitor, he had Indian Premier League and Big Bash League experience on his globetrotting resumé prior to donning Outlaws colours.

Under his leadership, Riki Wessels and Alex Hales immediately thrived. The pair both romped to over 500 runs for the 2017 campaign, and became the first two men to hit hundreds for Notts in the Blast. 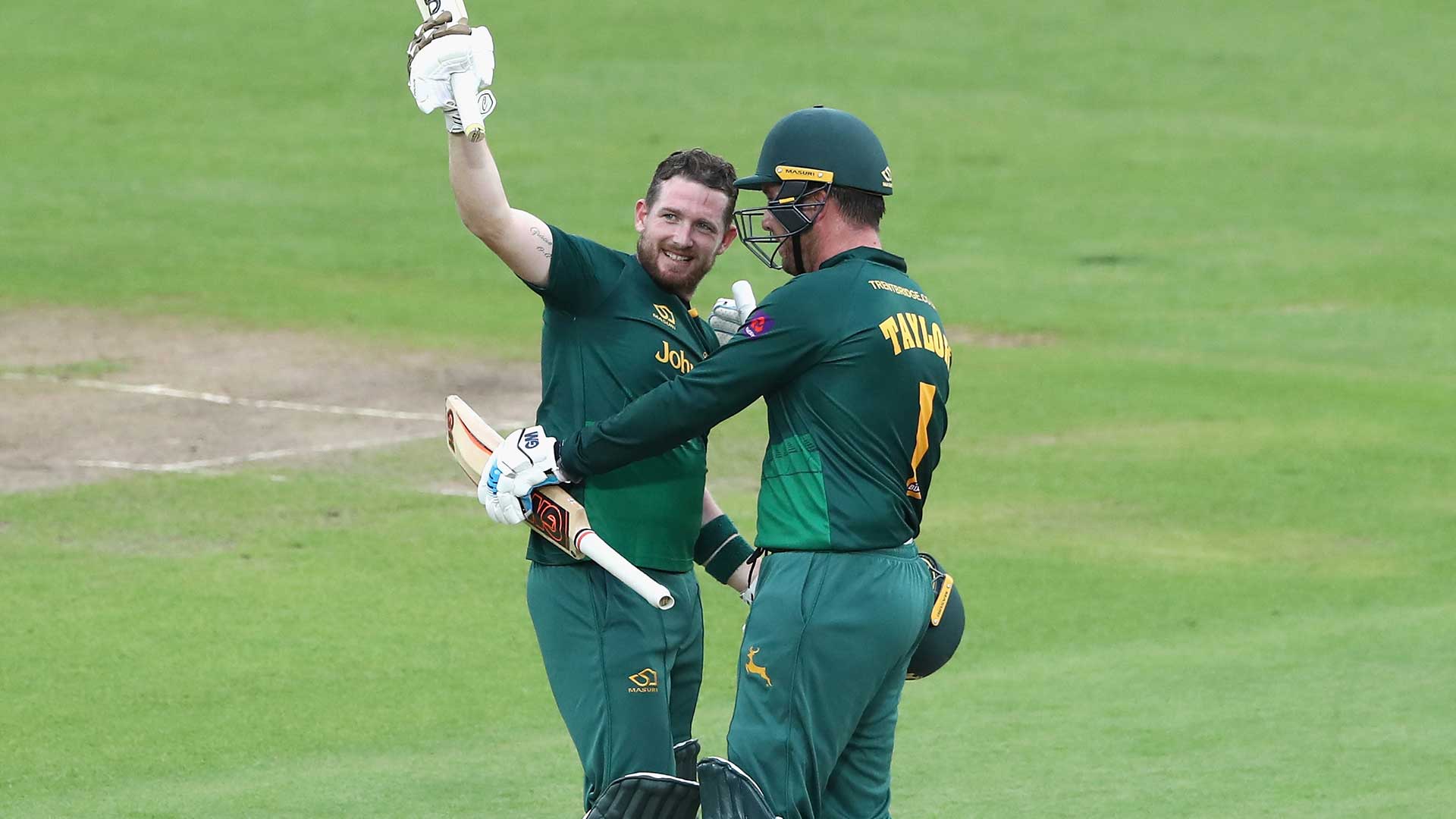 Derbyshire were the unfortunate visitors for the former’s breathtaking display, albeit the Falcons finished only five short of Notts’ 227/3, with both sides achieving their highest T20 scores.

Jake Ball and Harry Gurney were, meanwhile, at their death-bowling, wicket-taking best, sharing 43 scalps between them across the tournament.

Gurney, who took 4-17 in the 2017 final, would later be rewarded for his consistency with trophy-laden franchise stints in Australia, India and the Caribbean.

The first short-format medal hung around his neck would, however, be in the colours of his adopted county.

Steven Mullaney’s 3-22, including the wicket of an in-form James Vince, carried Notts to their first final in 11 years, before a record-breaking Finals Day stand of 132 in 81 deliveries between Samit Patel and Brendan Taylor helped set Birmingham Bears a target of 190; 22 runs too many, as it transpired.

The ups must, however, come with the downs, and Notts could not successfully defend their title in 2018 as Somerset put paid to the hopes of a second victory in as many years in the quarter finals.

But there were plenty of positives; not least the continued maturation of Tom Moores. The acrobatic, swashbuckling shot-making wicketkeeper-batter concluded the season as Notts’ top run scorer, including a match-winning 80* off 49 against Worcestershire, and 53 off 25 deliveries against Derbyshire.

It earned him a call-up to the Abu Dhabi T10 league, a 10-overs-a-side competition typifying the progress and popularity of the short format, and its evolution over the 18 preceding years.

Disappointment reared its ugly head again in 2019, when an agonising defeat to Worcestershire in the semi-final prevented a second trophy win in three years.

With six required from the final over, Wayne Parnell held his nerve to leave an on-strike Ben Duckett – who, following his arrival from Northamptonshire in winter 2019, endeared himself to the Trent Bridge faithful with a batting style which exemplified ingenuity – heartbroken. 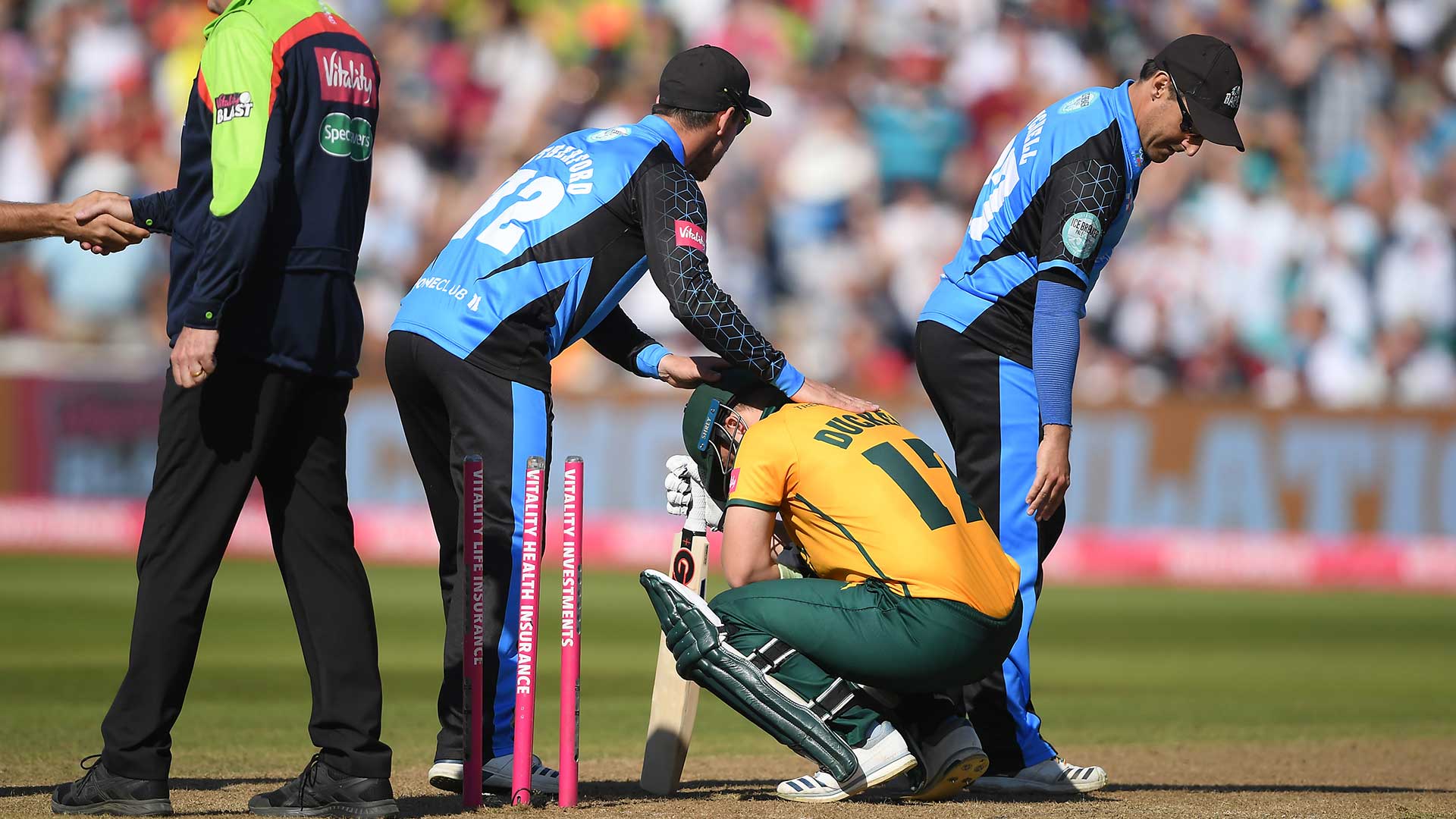 Diamonds are, however, made under pressure, and Duckett would prove to be a 24-carat asset 12 months later when carrying his side to Blast glory, if not sooner with a career-best 86* against Yorkshire in a successful chase of 190 in the group stages.

But there would be no members or supporters Sweet-Carolineing and cajoling the Outlaws on from the Hollies at Finals Day. Covid-19 had long since crept into the lexicon of the general public, and safety measures prevented attendance at sporting fixtures.

Yet it was a season containing all the fireworks of an ordinary year. Joe Clarke – himself an arrival from Worcestershire ahead of the 2019 season – set the standard with a magnificent ton in a winning cause at Durham.

He finished the season with a strike rate of 175, better than the other 49 highest run-scorers in the competition.

Jake Ball, meanwhile, trumped the parcel-delivering army who handed the British public their shopping fix during lockdown, by delivering 19 wickets at a strike rate under 11, and an average under 14.

It might have been another case of so near, yet so far, had it not been for a fumble from Dieter Klein in the outfield with three required from the final ball in the quarter-final against Leicestershire.

Appropriately, it was Notts’ evergreen Patel who hauled the Outlaws over the line in that match with a 16-ball 28*. 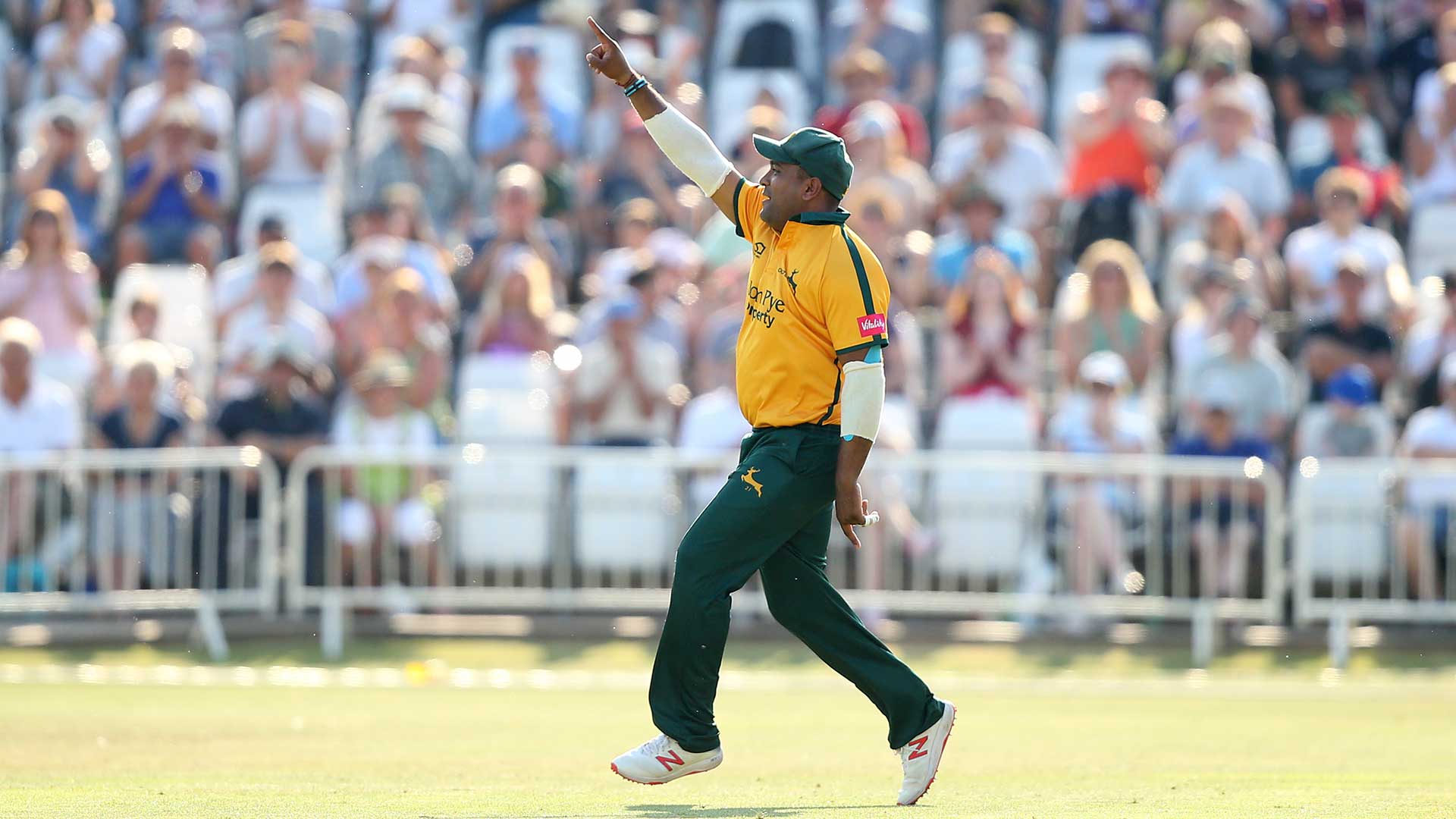 In the 2020 final, his concession of 25 runs across his four overs left the Outlaws chasing a miserly 128.

It looked to be a tough task at 19/3, but a 63-run partnership between Duckett – emphatically making amends – and Peter Trego, alongside a 31-run contribution from Christian, handed the Outlaws their second title win.

“We’re pretty fearless in the way we commit to our game plan and play our T20 cricket, and we back ourselves to play our own way,” he said, ahead of the 2021 campaign. 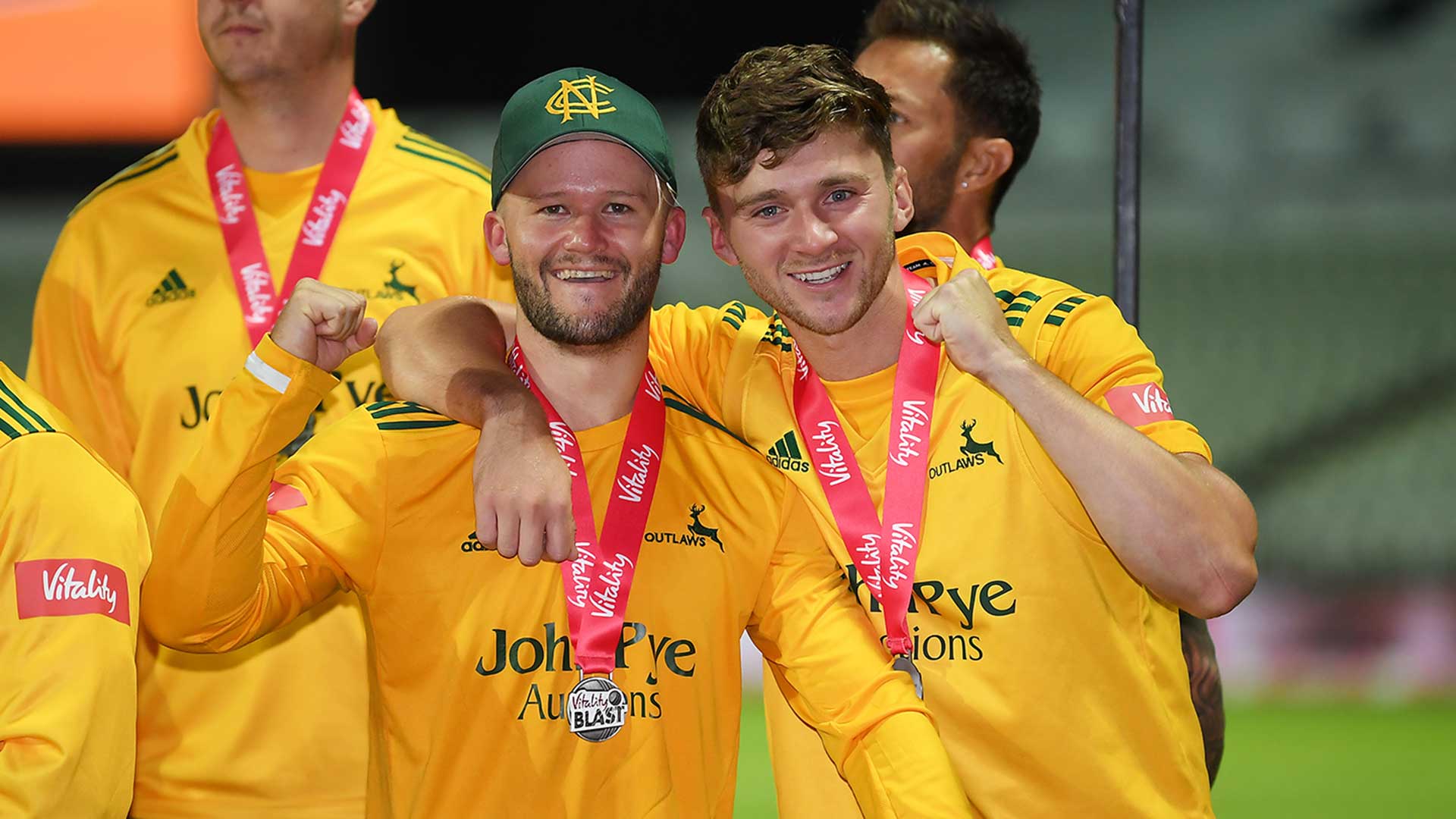 It’s an attitude which has brought Notts their successes in the last five years, and one which will remain at the core of Peter Moores’ T20 philosophy.

And as the Outlaws welcome in the next two decades of short-format cricket, few would bet against them adding more yet silverware.