Ben Slater, Ben Compton and Steven Mullaney all hit centuries as Nottinghamshire closed a productive first day of their pre-season friendly against Oxford UCCE on 410-4.

2020 red-ball Player of the Year Slater, who made 103, Compton (100) and skipper Mullaney (100) all retired upon reaching their respective centuries.

Their exploits helped the hosts to overcome a tricky start, where the first three wickets were lost with only 40 on the board.

But having reached the lunch break at 109-3, Notts then capitalised on the sunlight that enveloped Trent Bridge for the remainder of the day, ultimately closing for the loss of just one further wicket.

Hugo Whitlock was the pick of the visitors’ bowlers, claiming 2-54, but the other members of the attack toiled as the day wore on.

Earlier, Nottinghamshire had elected to bat first without the need for a coin toss in their maiden outing of 2021. Openers Slater and Hameed looked to set the agenda from the start, with Hameed stroking the game’s first boundary inside five balls.

However, he and Duckett were both removed by Whitlock shortly afterwards, and Joe Clarke was to depart before the end of the first hour. 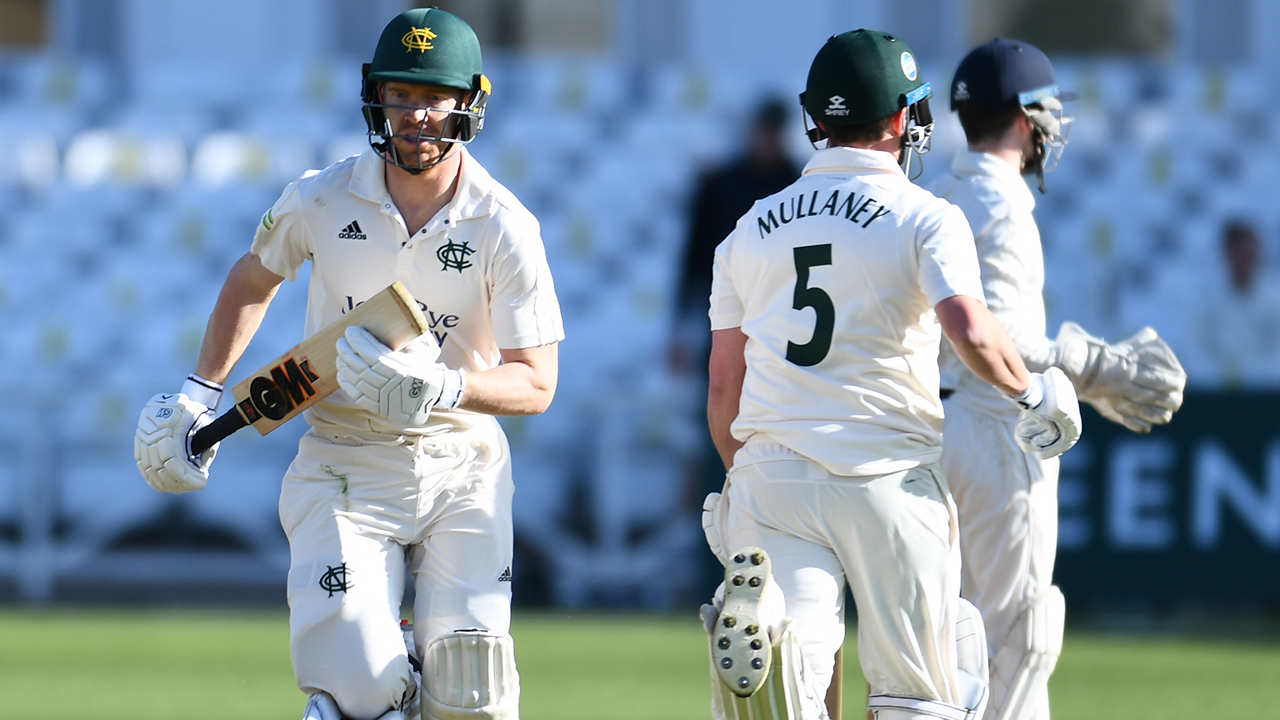 Slater and new man Compton then took charge to add 137 for the fourth wicket, a partnership which was crucial in stirring a recovery.

Slater was first to reach three figures, doing so with his 17th boundary. His retirement brought out the Green and Golds’ captain, who found his range with aplomb to race to a 52-ball half century, and ultimately to a 105-ball hundred.

Compton’s ton, and subsequent retirement, was sandwiched between those of Slater and Mullaney, with his score the result of a well-crafted innings which began in testing conditions.

Tom Moores was Compton’s replacement, and the wicketkeeper quickly brought up a swashbuckling half-century, peppering the boundary in reaching the landmark from just 44 balls.

As the shadows lengthened, Moores fell to a catch in the deep off Chris McBride, but Joey Evison (6*) and Lyndon James (8*) were able to see out the remainder of the day.