And now, the end is near…

Nottinghamshire faced less of a final curtain in the month of September, and more of a best of the best, fighting it out for the right to be crowned County Championship winners.

First up, a trip to Taunton. Many a team have tried and failed to leave with the spoils in recent summers, with Somerset losing just one red-ball match since 2017 at home.

In this encounter, however, there was only ever one team in it.

Nine players made 24 or more as Nottinghamshire went onto post 448 in their first innings, thanks, in large, to Liam Patterson-White's day to remember.

Having shown increasing promise with the bat across 2021, the all-rounder converted his efforts in the South West into a maiden First-Class century. 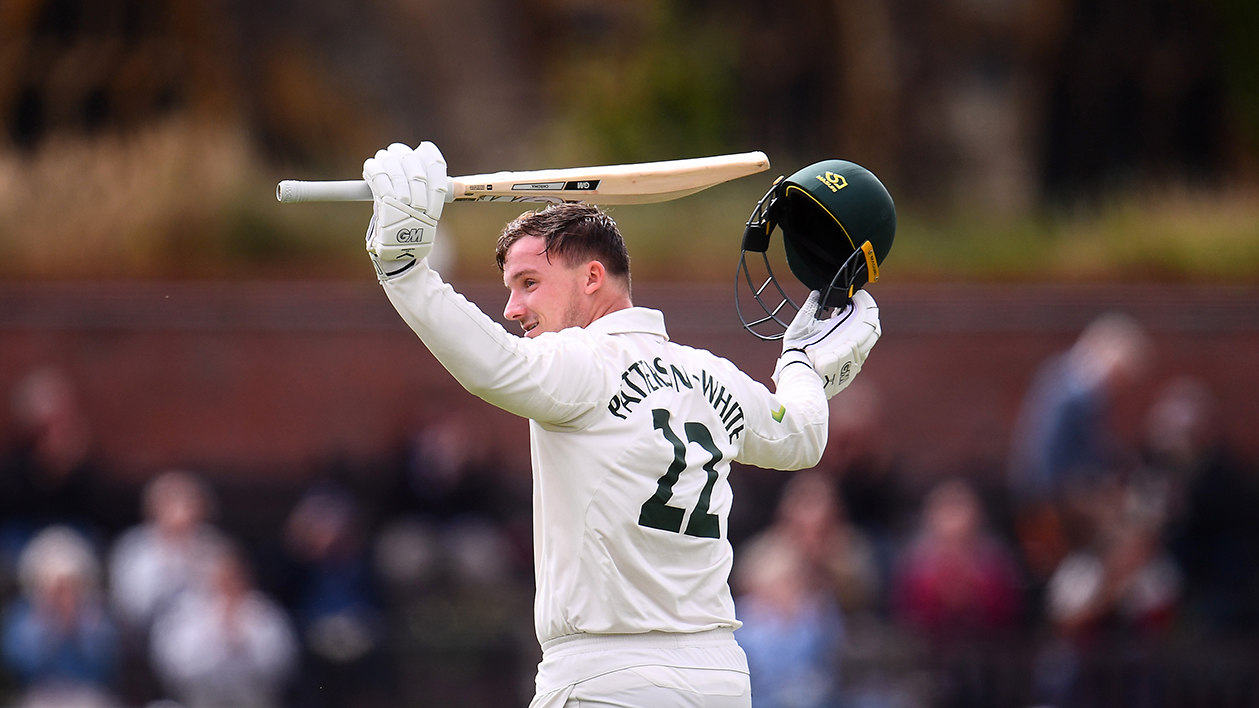 A grateful trio of bowlers in the form of Messrs Luke Fletcher, Brett Hutton and Dane Paterson rewarded the efforts of the batting unit with a high-class bowling display.

Somerset batters came and went as Tom Moores snaffled five catches behind the stumps, an effort of 107 in reply allowing Steven Mullaney one of his easier decisions of the summer.

Following on, it looked as though Somerset would fare even worse, falling to 86-7 as the trio of pacemen returned to their work.

Only some late order resistance stopped the Nottinghamshire train in its tracks before Patterson-White and Fletcher put the finishing touches on an innings and 160-run triumph; the club’s first at Taunton in 36 years. 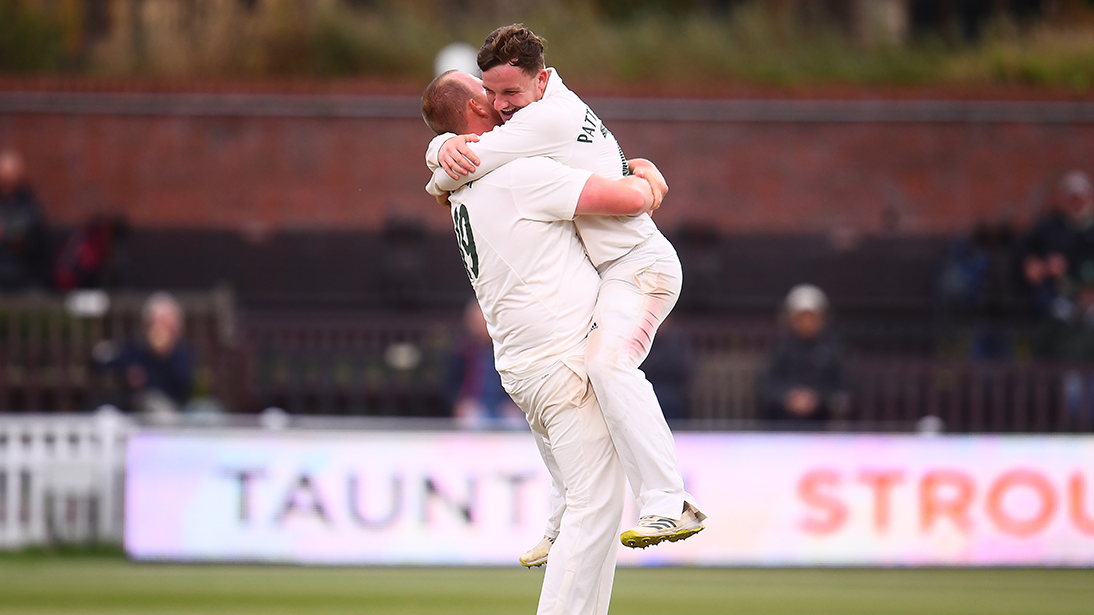 On a return to home comforts, what transpired over four days versus Lancashire is likely to be spoken of for years to come.

Everything seemed straightforward over the first couple of days, Nottinghamshire’s first innings 272 outboxing the visitors' 168, Fletcher, Paterson and Hutton once again sharing all ten wickets to fall.

Lancashire with their fast-bowling battery of Tom Bailey, Danny Lamb and George Balderson threatened to reply in kind, with Nottinghamshire reduced to 107-5 at the second time of asking.

However, a 176-run stand between Lyndon James (91) and Tom Moores (97) took the game out of the hands of the Red Rose, leaving all but two results possible.

The most likely of those looked to be coming not long after lunch on the final day as Fletcher removed Lavelle without scoring, the score 210-8.

Post-match plans were made, people scattered and the overwhelming sense was that the Trent Bridge crowd would see their side to victory with a session to spare.

However, all that changed as Bailey strode out to join Lamb.

What transpired over the next three hours had even the calmest Nottinghamshire fan biting their nail down to the cuticles.

Fletcher, Hutton, Paterson and the metronomic Patterson-White all tried, and failed to prize out the ninth wicket with Lancashire determined to head back north with a backs-to-wall story to tell.

After 108 runs, and 30.1 overs together at the crease, Great Dane, as he had become affectionally known, defied an aging ball and his no doubt creaking body to pierce the defences of Bailey and end his 126-minute effort. 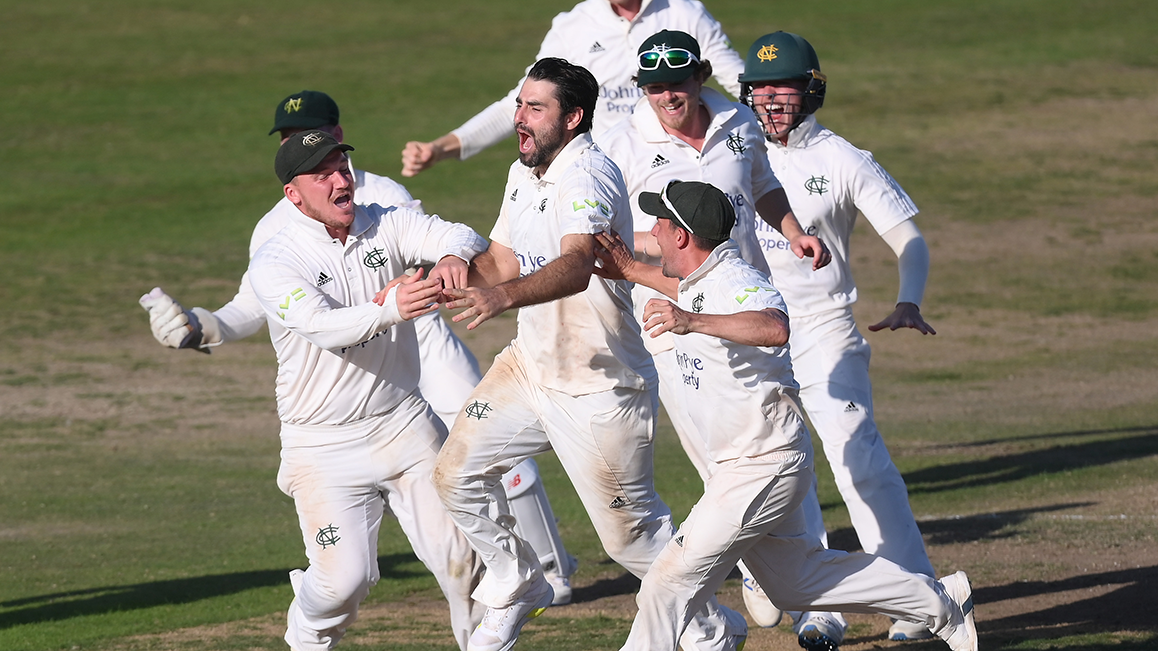 The highs of the Lancashire match unfortunately couldn’t be matched in a low-scoring encounter down in Hampshire.

Straight back in the field with the ball, having sent down 123.1 final innings overs just days earlier, Nottinghamshire’s attack would have been happy with the 226 all out outcome.

The response was hindered by running into an in-form Keith Barker who produced figures usually reserved for Fletcher in 2021, the left-armer finishing with 7-46 in the Green and Golds’ reply of 155.

On a deteriorating pitch the spinners came to the fore as first Patterson-White and then Liam Dawson and Felix Organ made their moves.

Unfortunately for Notts, a chase of 249 proved too much as Hampshire’s victory handed them the upper hand heading into the final round of fixtures.

With results needing to go their way, plus a hefty bonus points swing, Mullaney’s men took to the field hoping to end 2021 in style. And they did just that.

Joe Clarke’s seven Championship fifties could not be matched by his fellow batters but he would not settle for an eighth in the final fixture, notching 109 in a first innings 296. 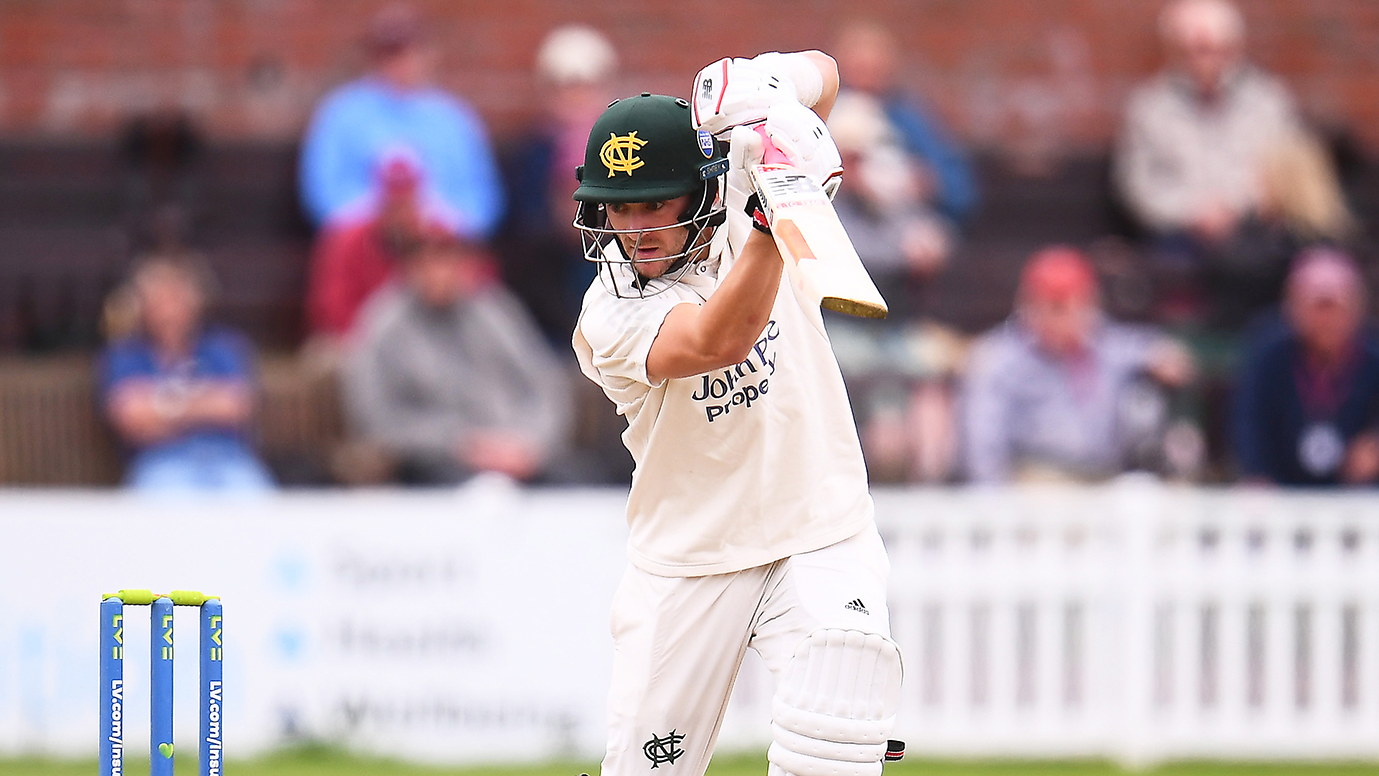 Having blown away many a Championship side over the summer, it was Yorkshire who were next to fall victim to the Green and Golds' battery of pace merchants.

Paterson’s wicket of Harry Duke would prove to be most significant personally, as the South African seamer brought up his 50th Championship wicket of the summer.

The cartwheeling off stump also signalled lunch on the second day and a guard of honour for the departing Peter Trego after two decades in the sport. 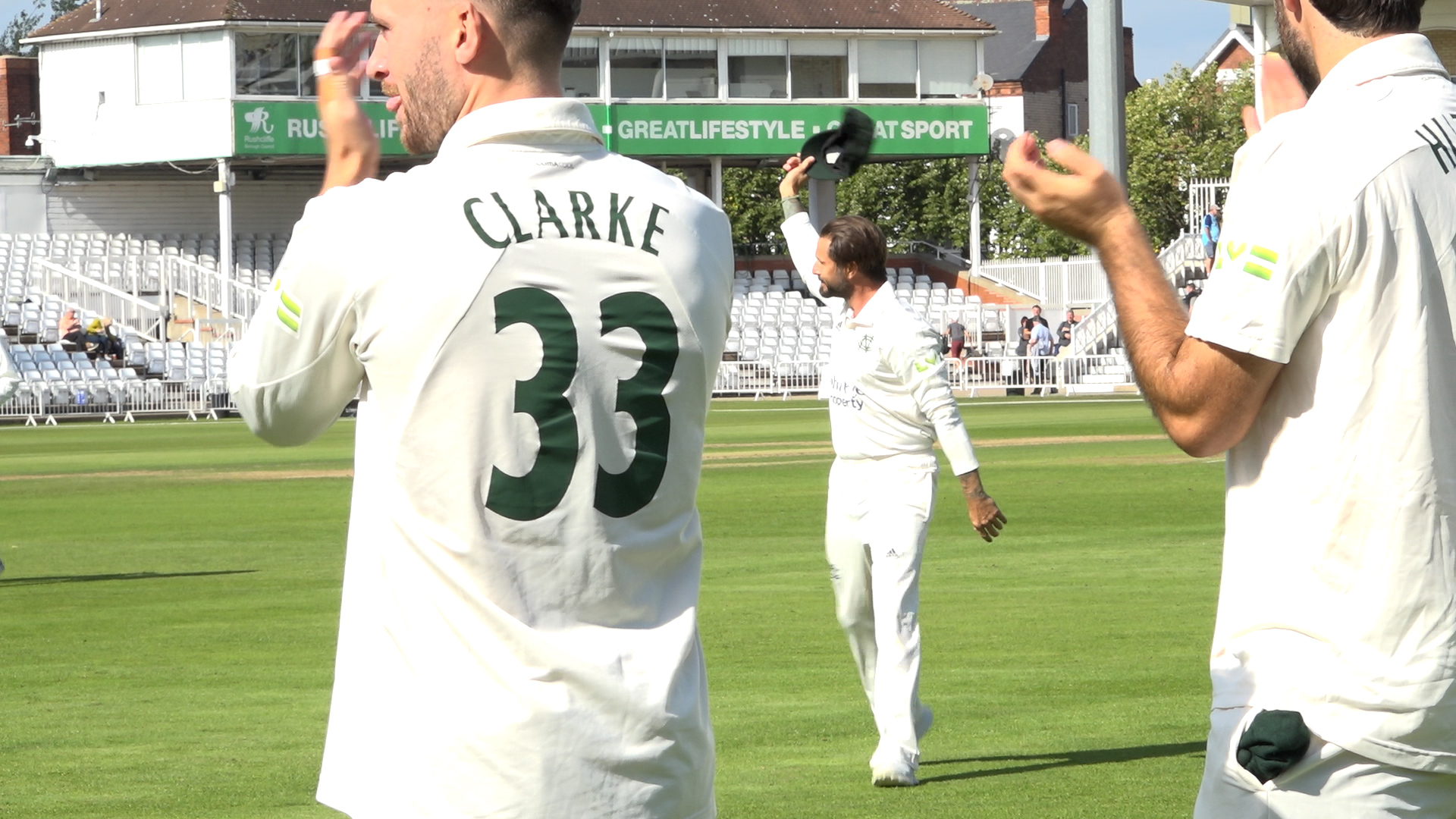 Yorkshire mustered more fight second time around, Adam Lyth’s 153 guiding the White Rose to 396 all out.

Ben Slater (79*) and Ben Duckett (54) set the Notts ship on course for victory, though, a five-wicket triumph the Green and Golds' seventh of the season with the red ball.

Unfortunately, results elsewhere didn’t fall but, a third placed finish, the highest since 2015, was just reward for a much improved 2021 summer. 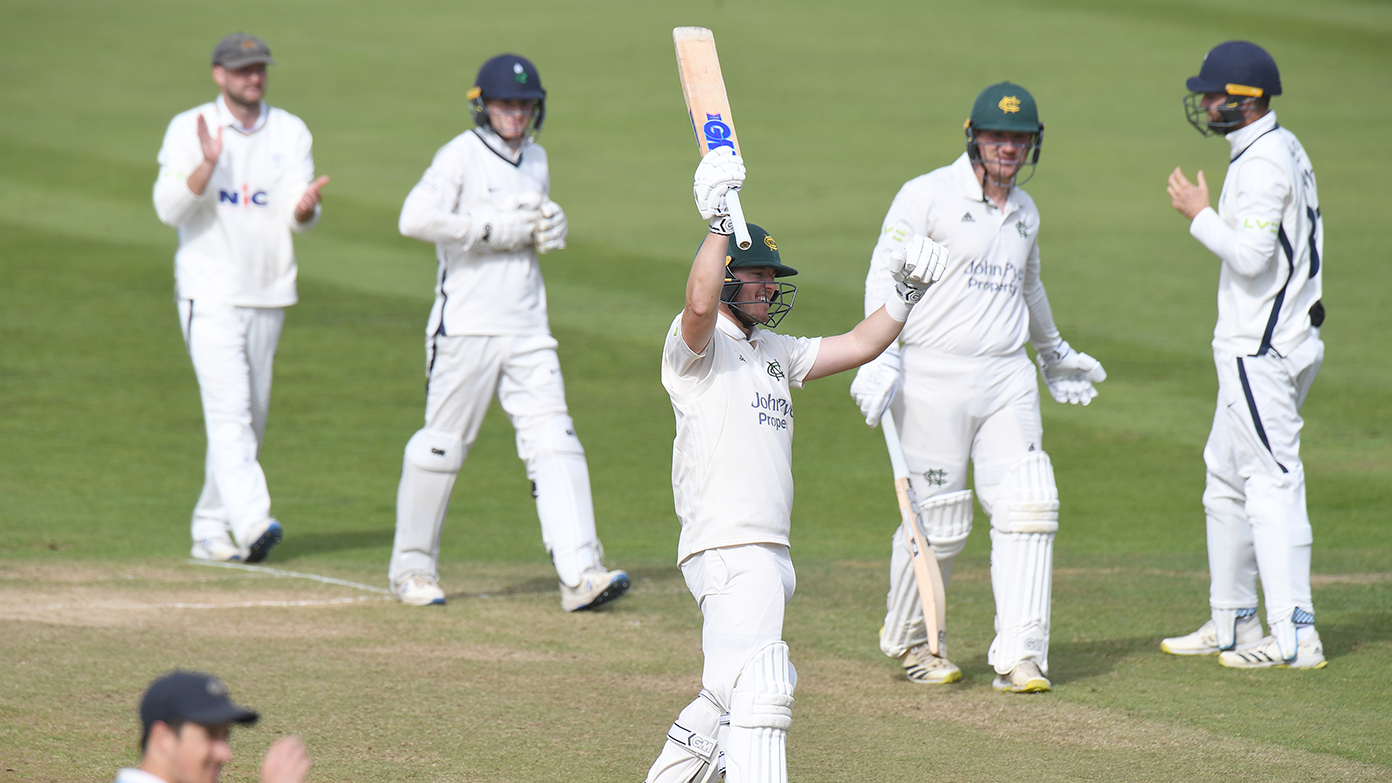